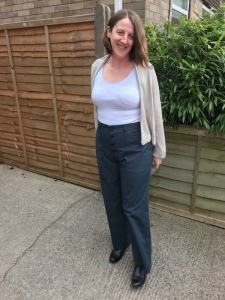 I feel like I’ve hit some kind of milestone, or grown up a bit, in my sewing skills after making these Lander trousers from True Bias. But it’s not that I found them hard to make – I found them WONDERFUL to make.

I had put these on my Make Nine 2018 on Instagram, and I told myself that if I could make these, then later in the year, it’s jeans. I thought from the photos that they looked quite straightforward, but there still turned out to be lots I needed to learn. So firstly I decided to make a toile to get the fit right. It’s been dawning on me recently that I needed to start learning about fit adjustments, given my lumpy shape in certain places, and what better way to start than these trousers. So I could tell from the cheap muslin fabric, that I first made a toile from, that I would have to go down at least one size from my hip size. But the muslin was moving all around the place, so I couldn’t be certain by how much. I didn’t have any other spare cotton big enough so I rummaged around the bottom drawer of some old fabrics and found a really naff tablecloth I’d been given, I think. It was quite sturdy cotton too, so thought it would replicate the final thing much better.

I made the toile deliberately two sizes smaller, so that I would know for definite how small to grade it. Yep, a bit too tight. But another thing I noticed was that my tummy was pushing the middle of the waistline downwards, making a v shape. Plus the crotch was rucking up. So I did a little research online, and found a fantastic pdf to download from Closet Case patterns company, called Pants Fitting Basics. I’m planning on making some Ginger flares later in the year, so hey, I’m learning on the Landers. I worked out I could make a full tummy adjustment to lift the waistline and the slightest crotch adjustment would fix the gathering around the crotch. Like, just a few millimetres would make all the difference.

I didn’t have enough tablecloth left, so found an old bed sheet that we rarely use – one of those flat ones, when we only ever use the fitted ones. 🙂 This version was near-on perfect. I realised that the crotch adjustment was a little too far over, so I brought it back by a millimetre or two. Fascinating how much of a difference it made because I was walking around in this toile and the legs were gathered in the other direction. 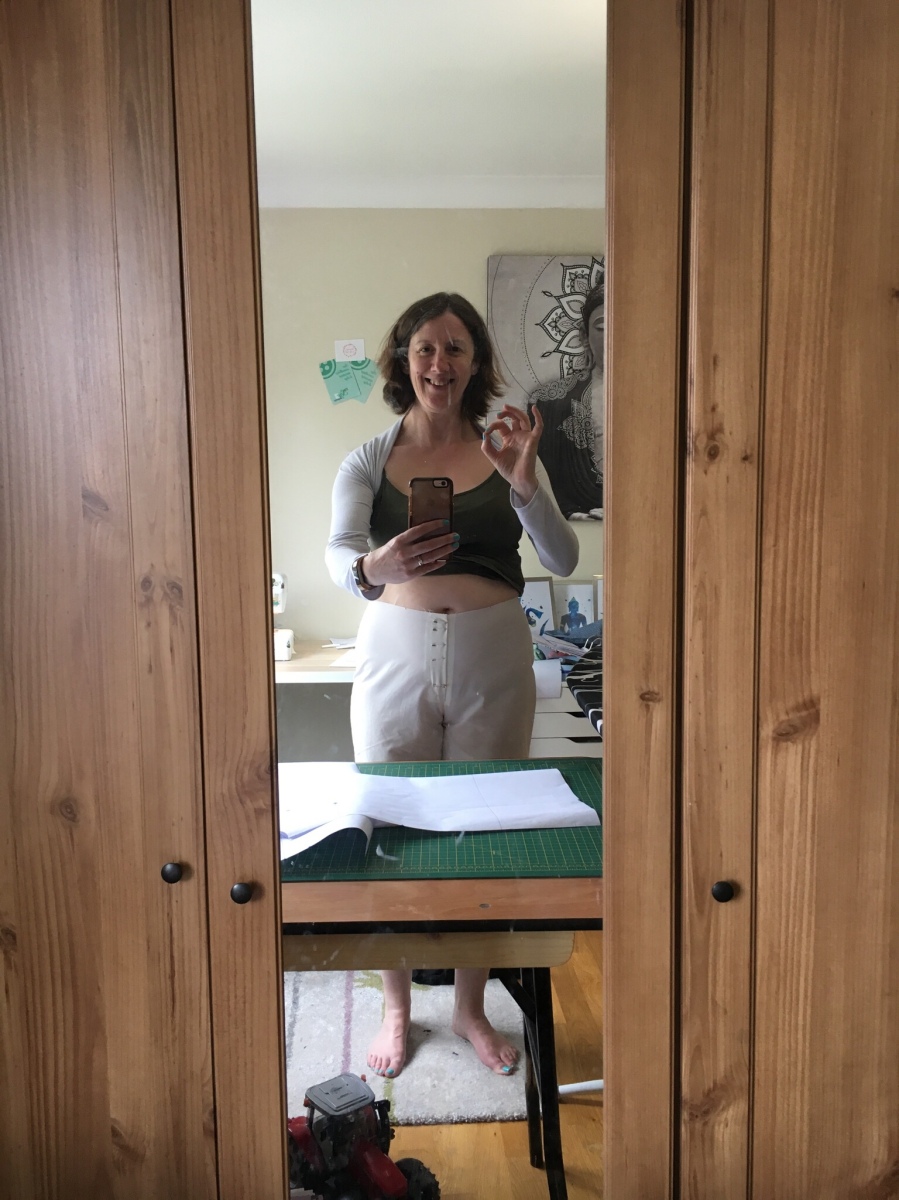 The great thing that I found making all these toiles is that I was practicing part of making the actual trousers, so the happy accident was that the button fly, which I was initially really nervous about, came to be the easy bit to do. 😀

I felt I was ready, so got on with making. I only ever have the odd hour here or there, especially during the week. We put our little boy to bed, and then make a late supper, and inbetween, we have a bit of crafty time. One evening, I thought I’d only done a little bit towards it, and my fluey hubby stumbled in, having fallen asleep accidentally, and told me it was 9:30pm! hehehe. Oopsie. So it’s taken another week to put them together, and then I had to find new buttons as I bought two types that were just wrong. I’d made them with quite masculine style fabric – beautifully soft though – a micro houndstooth from Fabworks Mill Shop called ‘Semper Fidelis‘. I could just stroke it all day. So I wanted buttons that were a little feminine to even things out a little.

These trousers are BEAUTIFUL. I am head over heels in love with how they fit now – in fact I feel like I’m really understating these, no matter how I write this. For the first time, I’m not cursing a low rise badly fitting ready made pair of trousers, that is making my belly go all muffin-top-ish. I want to make one for every day of the week. If you have suggestions of fabrics to make a summery version of these, I’d be grateful. The predictable option is linen, and there are non-creasy linens out there these days, but the width of the leg is kinda asking for something even more floaty, if you can get away with it…?

But then, maybe I’m secretly pining for full on palazzo…

After all these adjustments, I found looking through all my other things to make, that I’m looking at them with new eyes today. Like I know and understand things that bit more. I put some patterns aside, feeling more sure that I don’t want to make them. I’ve then started to set out all the things that I DO want to make. I have lots of fabric now, and each is laid out with the pattern sitting on top of it. I did this once before, around Christmas time, and it helped me just blitz those things in a surprisingly short amount of time.

Plans include a couple of flowery red numbers, very bold, plus a floaty pale blue item, in complete contrast. Lastly two jersey tops that have been chosen in order to use up my stash from previous makes. Really looking forward to it all.

Meantime, Me Made May….!

This site uses Akismet to reduce spam. Learn how your comment data is processed.